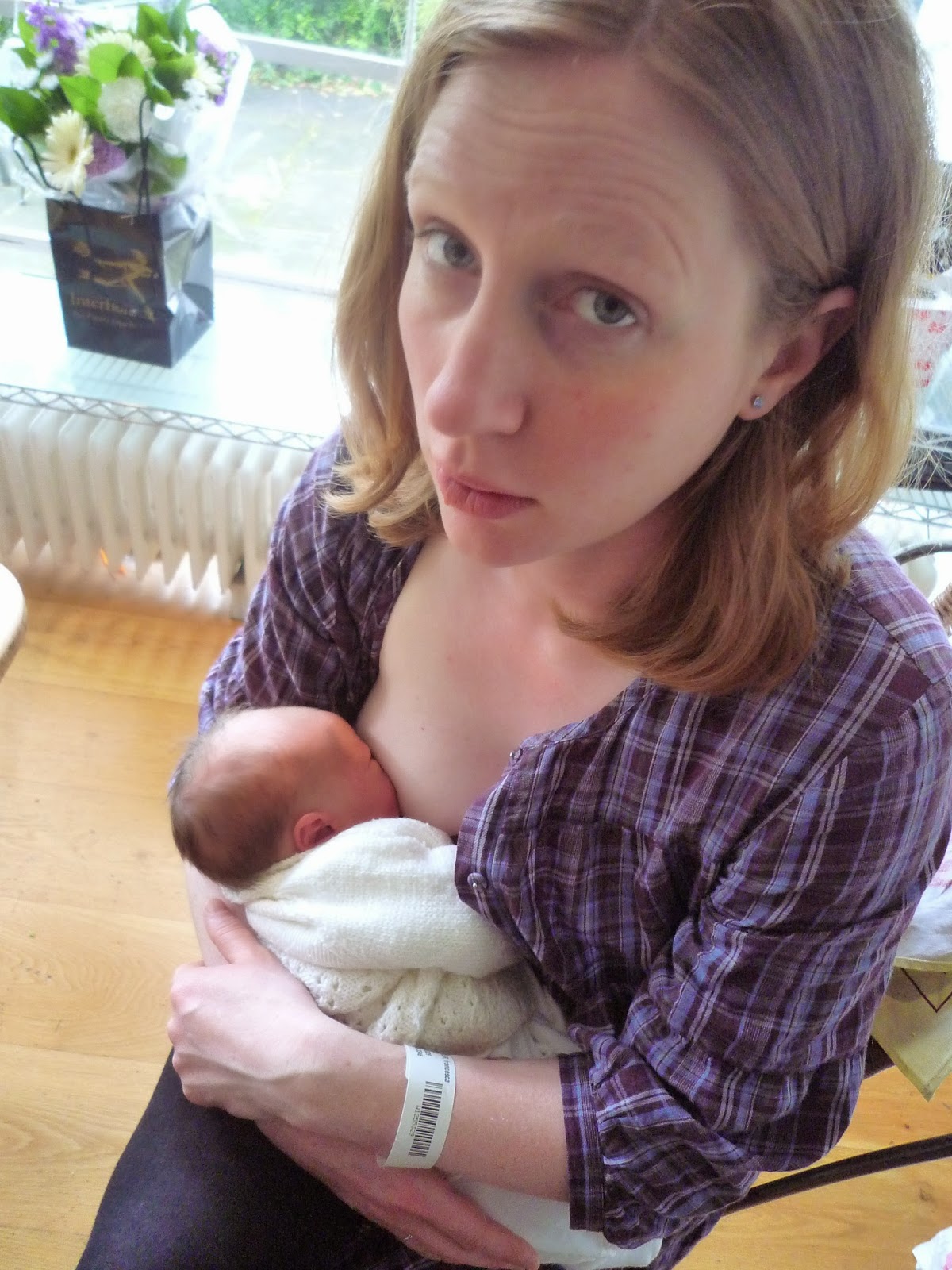 About a week after giving birth, you are lying on the sofa, an exhausted wreck. You are cradling the new little alien who has arrived to transform your life, to the extent that you barely recognise yourself in the mirror...and already, some visitor or other is asking whether you are planning on adding further to your family! This might be expected first time around, but, for me, it's been even more of a hot topic of conversation after the second.


When I was growing up, the classic 2.4 children was very much the norm. Sure, one best friend was an only child, another was one of four, but in the main, children seemed to come in standard pairs. Nowadays, the stats seem more polarised. I know many families who, having managed to get one sleeping through the night, potty trained and eating grown-up meals, are very happy to stay a happy family of 3. One child can be be added on to your normal grown-up life quite successfully; they are easy to transport, can be left with a grandparent if you need a weekend away, and don't cost too much - you can still afford to put them in childcare and do up the living room or go on a nice holiday. The child gets much more parental attention and if they need some peer socialisation, well there's friends and cousins and kid's clubs, so there's no sense of depriving them of a sibling.

Then there's the opposite group of families who produce 3 or 4 or even 5. In one playgroup, I overheard a mother saying that as an only child herself, she always knew she wanted several children. "But I never knew I'd have seven" she finished. SEVEN??? For these families, children cannot be added to your previous carefree adult lifestyle, they become a lifestyle in themselves. You need a new house and a new car. Holidays need to be cheap and cheerful as transporting a band of kids abroad is hard work and expensive. Unless you have an army of nannies (a la Nicola Horlick, alpha career woman and mother of 6), one parent pretty much has to stay at home to command the troops and operate a 24 hour laundry. The childcare costs would be prohibitive.

There is certainly something very appealing about large families. They often seem to be a stand alone, self sufficient entity. Who needs friends if you have 3 siblings? Who needs enemies if you have 3 siblings who can beat them up for you? They are in fact a life's work. If each child takes about 2 years of your life - 9 months of pregnancy followed by a year of sleep deprivation, frequent feeds, weaning etc, they leave little room for those grown up hobbies you had before having children - getting tipsy, exercising, reading the papers, chatting to your partner about non-child related topics, visiting shops/galleries/museums, a career. Social lives are limited, its harder to get a babysitter and visiting anyone becomes more of a problem, who has a spare room fit for a family of 7?

Of course, there is not always a choice. For women liberated by contraception, it is easy to forget the cultural and religious pressures which influence family size in the UK, whether Catholic, Orthodox Jewish or Muslim. Continuous child rearing is an important form of female oppression; frequent pregnancies render a woman physically drained and permanently preoccupied, unable to engage with the wider world. On the other side of the coin, infertility is on the rise, including the phenomenon of secondary infertility which affects women who have a child or children already but then have difficulty getting pregnant again. And there's the age factor. As people are starting families later, that ticking clock places a limit on the number of kids you can squeeze in before you and your partner feel too old or the medical establishment advises that it is too risky.

For those women with a choice, lots of factors probably affect family size. Your own childhood, your financial situation, your birth experiences, maternal and paternal age, cultural norms...In austerity Britain, as disposable incomes fall and living costs rise, a single child for working parents is a more practical option. But if one parent is giving up work and you are happy to choose cheaper/free activities and share clothes, the number of children doesn't matter so much. Some parents feel bereft without a babe in arms. Parenthood defines them and the empty nest signals not only the flying away of the children but the loss of identity and purpose for the parents. Conversely maybe the more children you have, the easier it is to justify to yourself or society at large your decision to give up work/go part-time? - a parent of four appears to be more needed in the home than a parent of say, two.

Gender may be a consideration. Everyone knows someone who kept trying for that longed for girl or boy. I read in the Guardian a while ago that, in terms of gender selection, in the UK the preference is for girls. I am always slightly concerned by this desire for a specific gender, as though that boy we always longed for will definitely want to go to the footie with his Dad and girls will want to spend time cooking and dressing up with Mummy. Oh the disappointment when this turns out to be the reverse or worse for the children, when these gender stereotypes are forced on them so they need therapy in adulthood to get over it. But then, much to my surprise, I have ended up with one of each. I have not experienced that yearning that some women have, for female companionship in a male dominated household or for family gender balance, that gender yin and yang. So who am I to judge?

Amongst the mothers I know, I would say that modern birth experiences have a massive impact on family size. Birth is quite a scary prospect these days. It is safer than at any time in history in terms of mother and infant survival but women definitely seem to feel a sense of helplessness regarding the whole process. You can write a birth plan, choose between an epidural or a birthing pool but quite often, the best laid plans fall by the wayside. Suddenly, after that 30 hour labour, ventouse/forcep experience, maybe emergency c-section, the four kids you were planning seems like a much more daunting prospect.

And finally what about the population question? My right-on paternal grandmother always said that we should only replace ourselves. However, while in Europe we see falling birthrates, booming birthrates elsewhere meant the population hit 7 billion last year. Among environmental activists, it is usually seen as somewhat selfish to have lots of children who will use up the earth's precious resources. But then dictating the number of children couples should have does not seem a very sensible way to go, not after China anyway. The recent news about the wastage of global food supplies suggests that we are probably able to feed our population more than adequately. It is minimising our environmental impact in terms of water, energy and waste that is most likely key to sustainability. Large families in the South typically use far less energy than small families in the North. So if you choose to have ten children in the UK maybe you should go old school and share baths, clothes and shoes to minimise the impact?

Personally, I am very grateful to have my two children. I am delighted that they will have each other to play with/annoy as they grow older. But it is definitely a strain. It is hard to maintain a sense of yourself or your relationship when you are man-marking. I am eternally thankful for the kindness of family, friends and complete strangers who hold the shop door open for the buggy, stop my oldest from running into the road as I try to soothe the screaming baby, who help me wrestle the kids in and out of coats, shoes, snow-suits etc when we visit. I think if we had more, this might tip the balance to beyond manageable. I am fortunate that as a result of women's liberation, we get to choose how many children we have. We are not slaves to biology (apart from those of us who get broody of course! Damn those hormones...)

There is the old adage that it takes a village to raise a child. It is definitely much easier to raise children in a strong community where people help each other, return favours, watch the kids. It will be interesting to see how society changes, how communities change under government reforms. To have true choice in family size, we need supportive communities, decent maternity services and flexible working options for both parents. In austerity Britain under the Conservative/Lib Dem coalition, it is hard to be optimistic.
Posted by Feminist Mum at 15:58