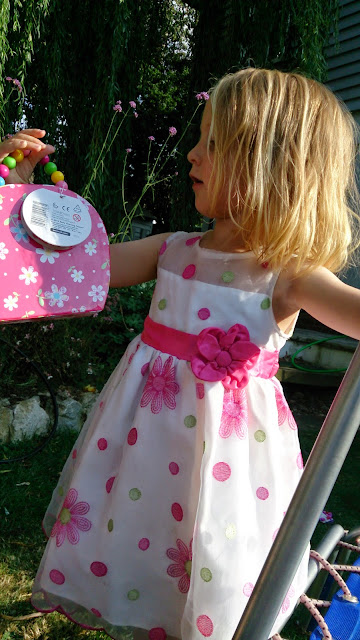 I've been thinking recently about how much we need to imbue our children with our own principles. I'm not talking morals or ethics, I think most people want their children to be on the same moral compass as they are, whatever that might be. I'm talking politics really and feminism in particular.


It has come to the fore lately because my three year old daughter has suddenly gone all "girly". Up until now, I could be a "feminist mum" by accident. She always wanted her hair short, was keen on trousers, presented a physical force to be reckoned with on climbing frames and has been happy dressing up as most gender neutral characters including doctor, spider and deep sea diver. I could smugly pat myself on the back for raising an exuberant, strong girl, confident in her own skin and immune to the whimsy sweetie pie world of pink and ponies and fairies...All this while my little son is pushing his doll around in a pram or playing ironing.

But now we have entered the "Princessy" stage...sigh. At a playgroup last week, my girl happily minded her dolly in the mini kitchen, decked out in a princess dress she had selected from the dress-up rail. I thought to myself, "hmmm, I'm not sure this was the way it was meant to go". Mummies and babies have always featured highly in role play and I'm not surprised by this at all, especially as she has a mummy and a baby brother at home. I suspect her new perception of what girls should play with comes from two sources: her peers (as she now spends much more time in preschool) and exposure to more advertising. While we think Doc McStuffins, a cartoon about an African American girl playing doctors with her toys, is probably a good thing, she gets to see all kinds of hideous adverts targeted at young children when we forget to switch channels in time. This morning she said to me, "I'm the Mummy mermaid. I have to get on with the housework". Of course I said, somewhat desperately, "and Daddy mermaid has to do it too!"

As parents, we have always tried to tow a middle ground with toys aimed purely at girls and with a particularly limiting vision of girlhood. She was given a Barbie once as a present; we hid it in the shed and managed to give it away to a raffle (only to sabotage the body-image of somebody else's little girl? Maybe we should have burnt it!) We let her read stories about princesses but prefer it if they are feisty ones who win out in the end. We respect her right to choose pink things some but not all of the time. I am more relaxed than my parents were, probably because the feminist fight doesn't seem as immediate but also because I remember feeling very hard done by as a young child. My yearnings for long hair, patent leather shoes, dollies to dress up were deeply felt and probably influence my own decisions to let my girl have these things if she wants them. These yearnings were not simply materialistic, they were about belonging, what I perceived at the time as the essential trappings of girlhood. Often, by denying children particular things we object to, we may think that we are protecting them but in fact we simply make those things more desirable.

Yet I am also aware that I did benefit from that upbringing - I am happy to go without make up, I don't need designer items to make me feel good, I have a healthy respect for practicality over style especially when it comes to footwear. I learned to perceive men as partners to women rather than as people to be obeyed or manipulated. While letting my daughter have pretty dresses as well as tracksuits, I don't want her to equate "looking good" with her self-worth. I remember being surprised and confused at about the age of eleven when a family friend said I was looking beautiful on a family holiday. I was completely unused to having my physical appearance commented on and I think that is a very good thing. Every time I say to my daughter "you look pretty", trying to give her a compliment, I kick myself. There are other better things to compliment her on - how brave or how kind she was or what a good effort she made. Not how she looks.

How we bring up our daughter is, of course, put in stark relief by the very existence of our son! When my daughter asked whether she could wear nail varnish, I was adamant that of course my little girl could not wear something so purely about tarting yourself up, even just for a bit of fun. But then it occurred to me that I would be perfectly happy for my son to wear nail varnish. When I met a Dad and his four kids wearing nail varnish, I thought "how right on, keep on subverting those gender stereotypes, good work!" So how is it that I would deny my daughter something that I would allow my son? That feminism becomes about parents denying things to girls that they are momentarily interested in. Would it be an amazing feminist coup if my son did ballet and my daughter did football? Could I be very proud of myself in bringing up kids unaffected by society's expectations and limitations, or would I be simply ignoring my children's rights to explore their own interests and talents for themselves? Clearly my daughter will simply end up becoming OBSESSED with nail varnish because I have made a big deal about it rather than trying it out a couple of times and forgetting about it.

In a book called Simplicity Parenting I've been reading recently, the author places a big emphasis on childhood being a special time for exploration, free from the concerns and clutter of the adult world. So worried are we that our children are not limited in the future, we over-burden them with our political and philosophical views. In how we talk, what we encourage them to do, what we deny them. The non-stop media outpouring of society's expectations and fears. Children need space and time to work out what they like and how they feel. If I make both my son and daughter do both ballet and football, just to show that I am not pigeon-holing them, will I simply be denying them the free time to work it out themselves? Just by playing together, my kids will know that girls are not weaker or stupider than boys and, hopefully, that boys and girls can be friends and equals.

We have stories about princesses becoming knights and doctors or just simply ditching the mean-spirited prince and running off into the sunset. Hopefully, for as long as my girl is determined to be a princess, she is going to be a proper kick-ass one!

See Books and websites section for some cool princess books
Posted by Feminist Mum at 21:53