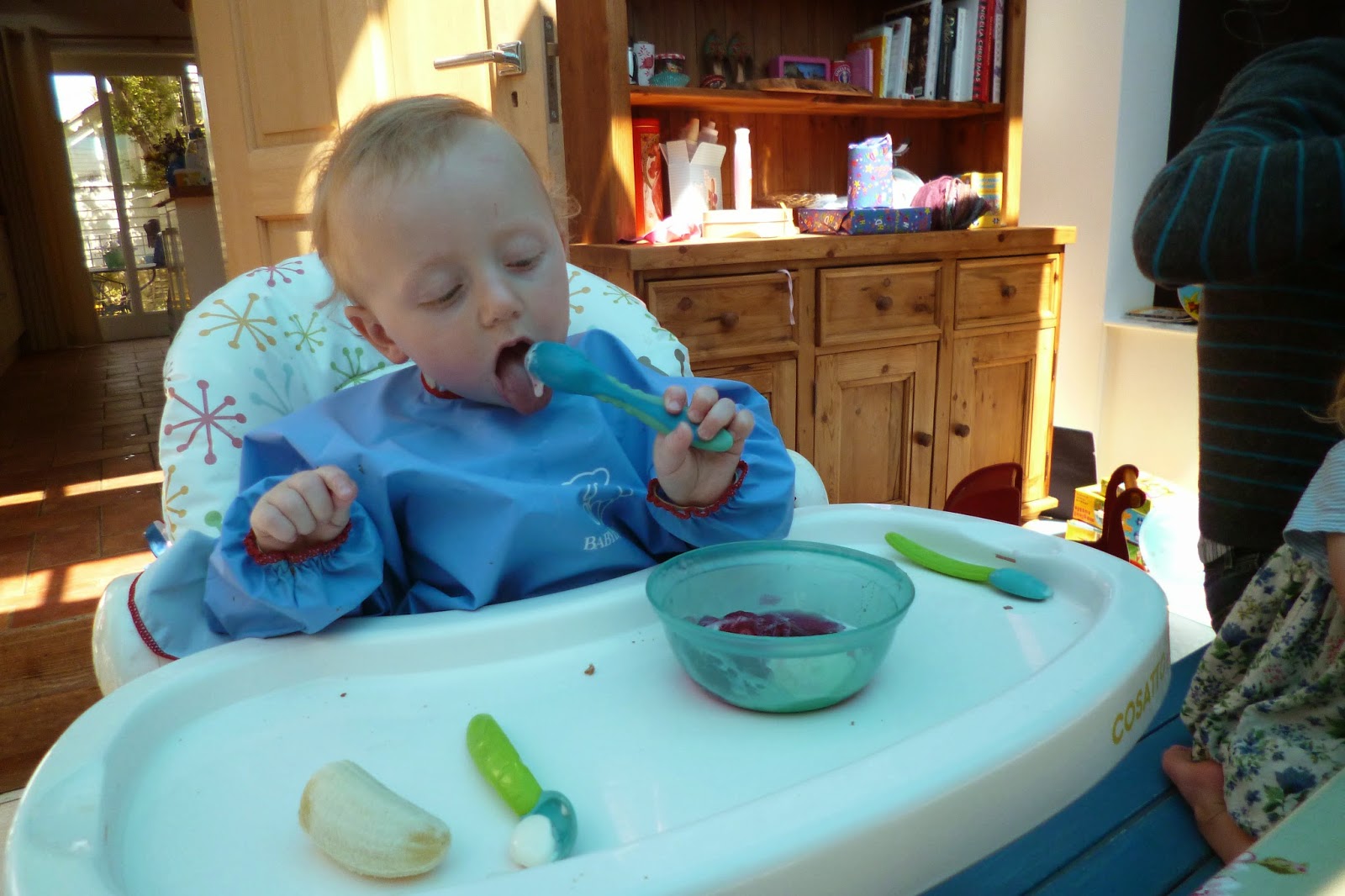 So this post has a very tenuous link to feminism. It is adapted from a piece I wrote a while ago for our local NCT newsletter about weaning your baby. The thing is, weaning is another one of those things that involves a decision. Parenting always seems to be full of controversy. Epidural versus natural birth, bottle versus breast, sling or pram…and just when you thought all the tough decisions were made, someone asks you how you intend to go about weaning your little one.

I think that learning about your child as an individual rather than "infant aged 4-6 months" is an important aspect of feminist parenting. You don't need to simply swallow received wisdom be it from your own mother or grandmother (the matriarchy?), helpful commentators or the medical establishment (the patriarachy?) because no one knows your child like you do. Now I was a paediatric nurse, I don't recommend going against medical advice but I do think chatting through your options with a health visitor is a sensible way to go. Bringing up children is no different from any other aspect of social life, it has trends that ebb and flow and new advice appears in line with new research. The account below describes my experience of weaning my children as something dictated rather more by my children than by me.

With my first daughter I deliberately went old school. Purees were good enough for me as an infant and my girl lapped up spoons of baby rice, followed by delightful soft fruits and vegetables. Then we tried to do the chunky stage and she became less keen. Admittedly, half pureed foods do look pretty unappetising.  She became very fussy, we needed elaborate games to get most things down her and there soon became a very narrow range of foodstuffs she was prepared to eat, except an expensive addiction to Ella’s Kitchen food pouches. Now aged three, mealtimes are hard work, involving cajoling, begging, bribing and eventually firm words!

I had vaguely heard of “Baby-led weaning” but to be honest this sounded a bit faddy and I was just not around anyone who seemed interested in deviating from the usual path. Second time around could not be more different. By the time I was thinking about weaning my son, baby-led weaning was much more on my radar. New friends and neighbours were all waxing lyrical about the joys of finger foods and my son point blank refused to take anything on a spoon. So we began with sticks of cucumber and haven’t really looked back.

The philosophy of baby-led weaning is that babies need to explore tastes and textures on their own. Rather than over-preparing foods into mushes that we spoon-feed in, it is better to leave an array of foods in front of them and allow the baby to dig in and experiment. While it is a lot messier, it makes family meal times easier because you can offer whatever you are eating, be it salads, meats, fish, bread, pasta etc, basically anything they can pick up.

My son, in many ways a bit slower than his older sister, had very good hand-eye coordination from an early age, as he practised holding peas between his finger and thumb. He is now also very good at feeding himself with a spoon or fork. In fact, I would go so far as to say he is a joy at mealtimes. Every now and again, I remember that just because my daughter won’t eat carrots, doesn’t mean my son won’t and sure enough, he gives everything a good go. Sometimes he likes it, sometimes he doesn’t but it is such a relief that he will happily sit and chew on healthy foods be it fried courgette strips, fish pie or houmous sandwiches… while my daughter screams if her arm accidentally comes into contact with a piece of cucumber!

Do I regret not doing baby-led weaning with my daughter? In a way, yes. Maybe she would be a much more adventurous eater now. But then, maybe not. All children are different – in some ways, my children chose how they were weaned – one loved spoons and purees, the other loved finger foods. It is also, of course, perfectly possible to mix both methods, maybe let baby play with a ripe banana then offer yoghurt on a spoon.

I would definitely say it is worth doing a bit of research into different methods and having a chat with your health visitor in case there are any concerns that might influence what is best for your child. If there is a way of getting your children to be more interested in food and up for trying new things then, in my view, it is worth thinking about! Life can be stressful as a parent. Feeding time can become a drama about who is in charge rather than an opportunity for nourishing your offspring in a sociable, fun way. I am starting to think that life with kids can be a more positive experience for everyone when we loosen up a bit; listening to our children and listening to our instincts.

Purees and BLW - some benefits and disadvantages

Conway, Rana (2011) Weaning Made Easy: All you need to know about spoon feeding and baby-led weaning - get the best of both worlds
Rapley, Gill & Murkett, Tracey (2010) The Baby-led Weaning Cookbook: Over 130 delicious recipes for the whole family to enjoy
Posted by Feminist Mum at 07:38