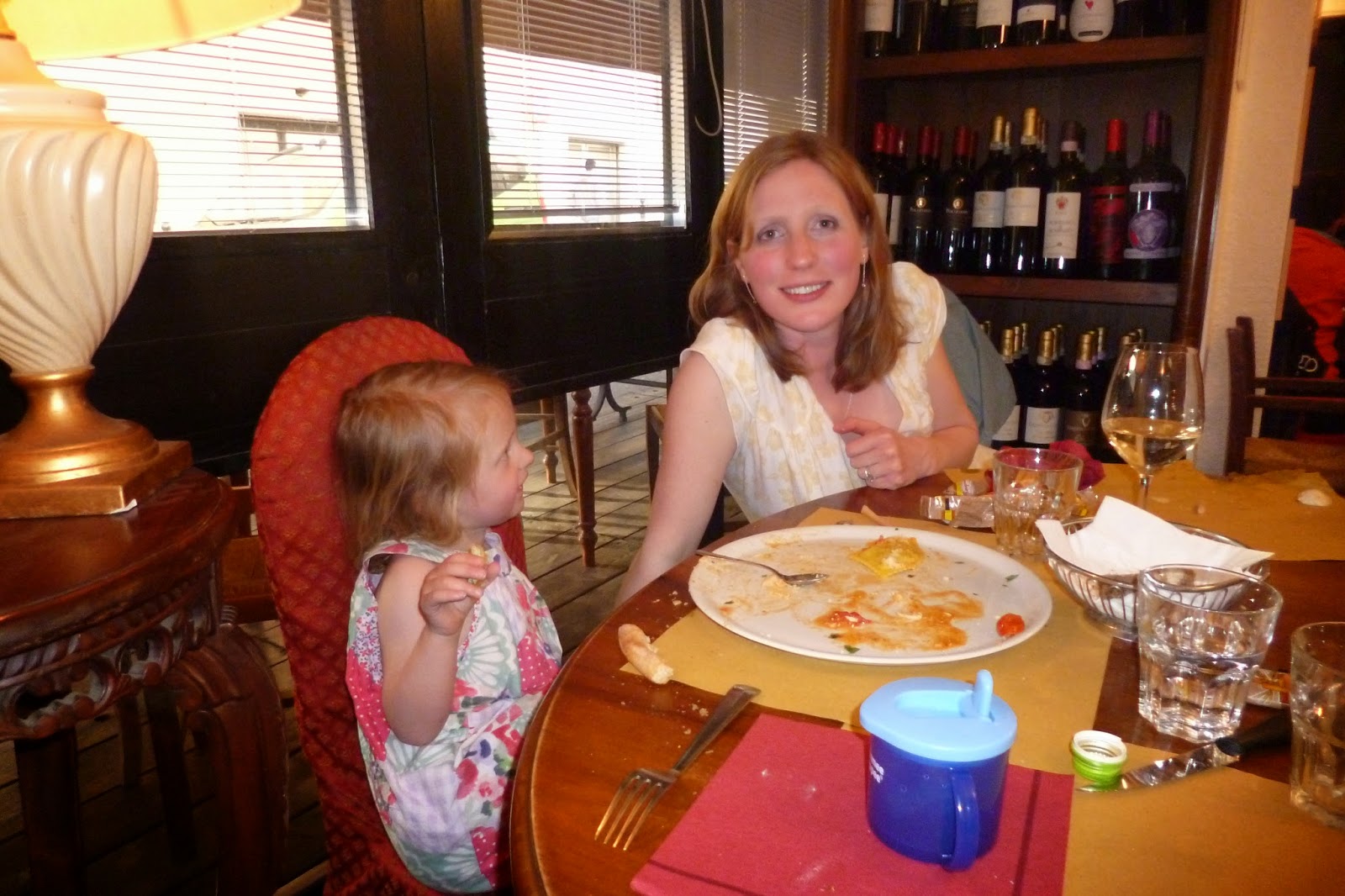 My 3 1/2 year old daughter has recently started looking in the mirror in our bedroom, usually wearing some fancy dress finery, and asking "How do I look?" I feel slightly paralysed by this question. Do I say "beautiful, sweetheart" and make her feel good or is that reducing her to her physical appearance? Or do I just say "It doesn't matter, honey. It's whether you are a nice, kind person that counts"? I think I've kind of said both but haven't felt very confident in either. It feels like I am skirting round the issue and need to take it by the horns!


There was an interesting piece on Women's Hour on BBC Radio 4 a few weeks ago, entitled How do you feel when you look in the mirror? Women rang in with their stories about growing up with a negative body image, weight worries, dieting etc, some voices quavering with emotion on air as they recalled feelings of shame and humiliation. Psychotherapist and feminist author, Susie Orbach, had an interesting slant on things. She argued that we have a duty to bring up our children with self esteem, an argument which I found relevant to my quandary above. In today's society where image is so important, we owe it to our children to tell them they look gorgeous and make them feel good about themselves. Because if they don't feel good at home, they sure as hell aren't going to cope with the bombardment of airbrushed images and endless critique of women's bodies in the media.

This made me reflect on my own body image when I was growing up. I first really became conscious of my body in relation to my peers at the age of around 9 or 10. A couple of things happened at around the same kind of time. I remember my gang of girls discovering our parents' weighing scales in the bathroom; the chat in the playground was who weighed 5 1/2 stone, who weighed 6 stone? We knew less was better. At my weekly swimming lessons, I started to realise that I didn't have the skinny, waif-like physique of a couple of the other girls. I have always been more muscular, more sturdy than waif-like. I was also aware of debates about weight at home. My mother would worry about being overweight and my father would say, "A moment on the lips, a lifetime on the hips!". He, himself, into running and keeping fit, would take a day off eating every now and again to get himself back to what he considered his acceptable weight.

Although I think I was a reasonably fit child (I liked PE, a group of us swam 1km each as part of a swimathon aged 10), I suppose I had a hearty appetite and must have had a bit of puppy fat. I had been brought up to finish what was on my plate. I remember my father saying to me one evening as I got ready for bed that I was "going to get fat" if I wasn't careful. A couple of years later, he said "I think you'll be 9 1/2stone by the time you're 16" - an odd comment on reflection but I knew this was bad because my parents talked about when my mother was only 8 stone before she had children. These comments my father doesn't remember making and I don't think he could have anticipated the impact they had. Whether it made a difference my father making these comments rather than my mother, who knows?

Of course, in response to these suggestions, I promptly began to obsess about eating less. When I started at an all girls secondary school, again we were very aware of each other's weights. Who weighed 7 stone, 7 1/2 stone, 8 stone? We weighed ourselves several times a day. We skipped lunch, secretly saving lunch money to spend on lotions and potions instead. We were always checking how we looked - I remember walking down the high street with a friend wondering why she kept on looking in the windows of betting shops! She was checking how thin she looked in her reflection in the glass. Limiting my food intake together with a growth spurt started to give me the desired thinner body, in fact I even think I look a little gaunt in some photographs taken at the age of 14. On holidays I refused ice cream and swam laps of the pool to work off meals. My parents started to become a bit concerned then. But of course, telling a teenage girl that she is getting too thin is pointless. Being thin is the ideal. You have control.

Looking back, I think my parents were products of their own families' dietary fears. I remember both my grandmothers serving up apple pie with cream or blackcurrant cheesecake while at the same time, saying "oh, just half a sandwich for me" or talking about grapefruit diets. Who was fat, who was thin, who needed to lose the baby weight were always topics of conversation. I guess in the 50s and 60s, when rationing was over, trying not to over-eat became a new challenge, especially with fashions for slender frames such as that of Twiggy. I know that my grandmother weighed 7 stone 2 lb on her wedding day, my own mother 8 stone.Why do I know this? Because it mattered to them.

I think two things saved me from developing a serious eating disorder as a teenager. One is exercise. I joined a gym in the holidays after my GCSES and started working out every day, eating only leaves for lunch, on the assumption that this would give me the perfect body. When it didn't, I realised that while you can tone up and shed some pounds, you can't make your legs longer. You can't totally eliminate your bottom. But you can be fit and feel good. I also started doing yoga and stretch classes and being the youngest there, I was super bendy. Oh how I lapped up comments about how flexible I was. I guess I stopped hating my body and started to respect it for what it could do. I looked at BMI charts and realised that the dreaded 9 1/2 stone was a perfectly reasonable weight for me, I am taller and have more muscle than my mother.  Secondly, going in to the sixth form changed negative relationships of female scrutiny; new friends arrived in all shapes and sizes with new fun interests. We started going to pubs and clubs and realised that we were in our prime, desirable more for our youth and enthusiasm then how long we could last on an Options hot chocolate ("less than 40 calories a cup!").

In the Women's Hour programme there was some debate about how much we can blame our parents about our insecurities. We are all products of the society we grew up in so can we really expect anything different? Susie Orbach argued that actually we have to accept that the buck stops with us. If we want to have children who don't grow up with hang ups about their body, we have to take responsibility and give them a positive body image. To do this we need to present positive role models. If you are always lamenting about your own body, it will brush off on your offspring. If you live off diet shakes, how will they learn about healthy eating?

This is hard because you have to get over your own body insecurities. It is easy to say, "oh I would never do botox or surgery, its so much better to age gracefully, after all, every face tells a story!" until your eyes are blue tinged hollows from sleep deprivation, your forehead actually looks like a ploughed field when you frown and your tits have been ravaged by ravenous babies. My pelvic floor, never great in the first place, now needs to go on one of those American reality series, Pelvic Boot Camp or something (ok, don't picture that!). I will never pull off skinny jeans.

But what I have learnt from when I did long distance running in my 20s, is that "it is all in the mind...." Think "tired, weak, hot, thirsty" and you stop running. Think "strong, tough, fit" and maybe a "hell yeah baby, COME ON" then you keep going. Positive mantras are the way forward.

So, I'm all about being positive. I am in good health. I haven't lost any limbs. I ran a marathon a few years ago (ok quite a lot of years ago). I have climbed Scafell Pike. I have learnt to ski black runs (cautiously). My body has gestated twice, given birth twice and nourished two babies, sustaining a grand total of 4 years solid pregnancy and breastfeeding. I can roll around on the floor and cuddle my kids. I can cycle and dance and do silly yoga positions.  I am a few pounds heavier than I'd like after a lot of turkish delight and mince pies at Christmas but if I eat a bit less and exercise a bit more that isn't the end of the world. If I put on some nice underwear and some make up I actually scrub up ok.

I want my daughter and son to see their parents being fit and healthy, not endlessly struggling against some unrealistic ideal of physical perfection. Here is the new body image manifesto in our house ( I should probably mention this to my husband and the grandparents):