In defence of the anti-feminists... 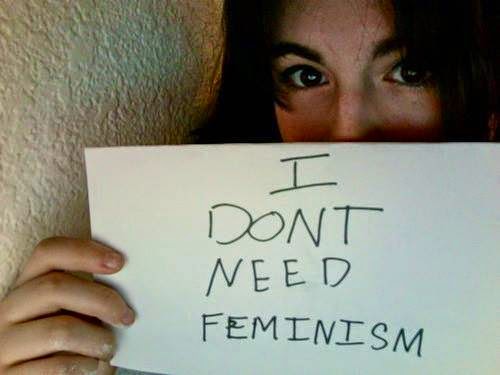 Over the summer there has been an outcry amongst feminist commentators and left-wing columnists about the website Women Against Feminism. This website allows individuals from across the globe, mainly young women, to post a photo of themselves holding a placard with an explanation of why they are opposed to feminism. Some of these statements are expressing traditional, conservative, right wing views as you might expect. On August 28th, a woman states “I don’t need feminism because I want to promise my man to love him, honour him and obey him”.

Critics of this website have written excellent pieces on why feminism is relevant today – the victories of the past, the local and global challenges of the present - such as this by blogger, I Wanted Wings. They typically view the women who submit images to the site as uninformed, confused, selfish or misguided; in the words of Robin Abcarian in the LA Times, the site is “a showcase for ignorance about history and the struggle for gender equality” (8th August 2014). There is even now a spoof site Confused Cats Against Feminism!


While I clearly wouldn't agree with a lot of the statements made by Women Against Feminism, that doesn’t make the contributors stupid. It would also be wrong to clump together all the views expressed on the website as one. The contributors present a range of perspectives on feminism, some not that different from my own, and can't just be accused of not getting it!  Feminism is a movement, not a club with a clear bullet-point manifesto. Perspectives depend on individual experiences and encounters and your place within a historical trajectory, from the suffragettes to burning bras to campaigns such as No More Page 3 and Everyday Sexism.

In Bad Feminist, Roxane Gay says that as a teenager, her understanding of feminist meant an "angry, sex-hating, man-hating victim lady person" (2014:xi). By contrast, when I was growing up, feminism had mainly positive associations to do with equality, opportunity, choice, self-confidence, compassion and collaboration. But as Lucy Mangan wrote in Stylist, it isn’t perfect. I also associate it with denying girls and women choices because they may reinforce gender stereotyping – woe betide the feminist who lets her daughter wear pink or wants to be a stay at home mum. Feminism can also promote segregation; I went to a feminism workshop and was told men weren’t allowed. The tutor’s need for a “female space” excluded women and men learning and working together on gender issues.

There are people who call themselves feminist who come across as aggressive, simplistic or uninformed as there are in any group of people with strong feelings on an issue. There are differences of opinion. In my own writing I have been criticised for referring to make up (a key issue in the 70s) and for referring to the 80s ideal of “having it all” in terms of work/life balance (according to Sarah Ditum, a “neoliberal individualistic dream”). I even worried about calling myself a feminist in the first place - what if someone said I didn't know enough or wasn't a true feminist!? Clearly feminists are happy to critique each other so why not listen to some views from outside?

What are the Women Against Feminism actually telling us?


Each wave of feminism has had its own struggles be it the vote, contraception, body image, climbing the career ladder, the pay gap or violence against women. Yes, a lot of people may not be as au fait with the history of social change as they could be. But it is worth taking note of Women Against Feminism because they tell us feminists how we are failing to communicate why feminism really is relevant NOW.

To be honest, some of the contributors to WAF have either encountered some very aggressive feminist campaigners or it is a clever exercise manipulated by a secret unit of chauvinists, rubbing their hands with glee! There are lots of references to bullying and many have a problem with the way people calling themselves feminists campaign.

Some of the women view feminism as essentially dis-empowering, portraying all men as violent and all women as victims.

On August 24th, a woman in a burka holds up a sign stating “I am happily and perfectly free. Your perception of my rights doesn’t represent me… Feminists don’t represent me”. White Western feminism clearly cannot claim to advocate for women whose beliefs are based in a different socio-religious context. On August 11th: “I don’t need feminism because - as a young black woman I have enough problems without adding “psycho radical feminist” to the list of reasons why no one should take me seriously – I am not a bully and I refuse to associate myself with a movement that has gained and is proud of its reputation for the harassment and belittlement of others in the false name of equality”.

Interestingly, a lot of women are calling for an end to feminism and a focus on equality for women and men.
And many clearly state that they are against "modern feminism", presumably accepting historical progress but unhappy with the movement now. July 23rd: "I do not need or want modern feminism because it has become confused with misandry which is as bad as mysogyny and whatever I want to do or be in my life, I will become through my own hard work".

What do we need to communicate about feminism?


The statements submitted by Women Against Feminism suggest to me that these are young women put off feminism through feeling bullied by campaigners who judge their lifestyle choices and are unequivocally negative towards men. One person states "Modern feminism doesn't make me feel empowered, it makes me feel AFRAID" (July 27th). Clearly passionate campaigners may reject any difference of opinion and can seem dogmatic and aggressive.

Maybe we need to talk more about feminism as a positive, as an attitude rather than a code. In "Bad Feminist" (2014:x-xi), Roxane Gay explains why she feels she has to go on the defensive,

"I am not terribly well versed in feminist history. I am not as well read in key feminist texts as I would like to be. I have certain...interests and personality traits and opinions that may not fall in line with mainstream feminism but I am still a feminist. I cannot tell you how freeing it has been to accept this about myself".

In a world where we are more connected than ever, we need, as feminists, to communicate effectively and sympathetically. There are times to be angry, to be belligerent, to say what needs saying. And there are times to listen with respect, especially to the views of other women. Rather than denouncing young women’s opinions as ignorant or simplistic, wouldn’t we do better to engage? Wouldn’t feminism do better to share perspectives and include rather than exclude?   And hey, at least people are talking about feminism!


Thanks for reading. Would you call yourself a feminist? If not, why not?