Stories for girls, stories for boys? We all like dinosaurs and tutus in our house! 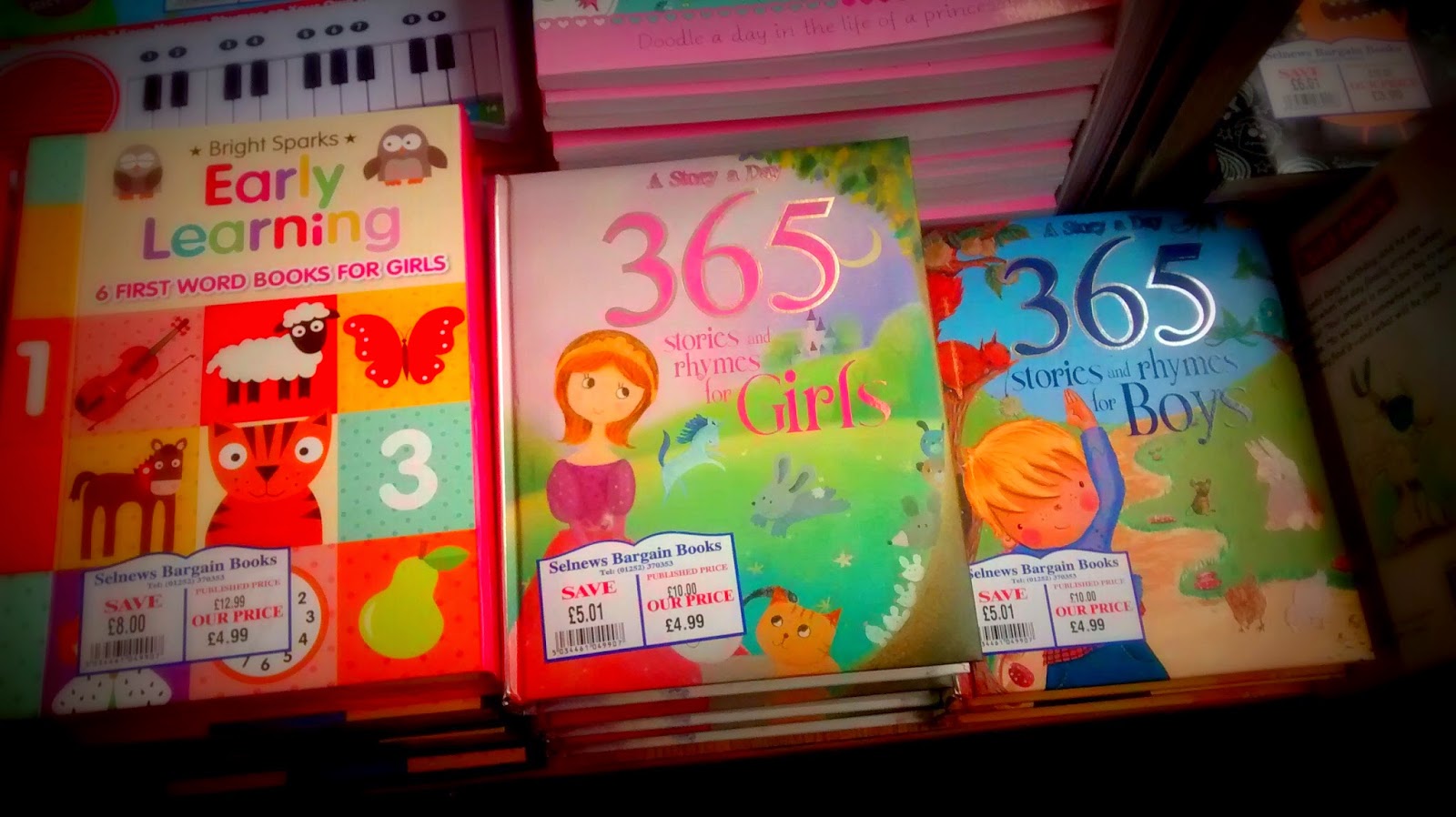 It all seems so simple. Wander into your local bookshop or library, find something for your little one that is bright, colourful, interesting. It attracts their attention and they wave it aloft, crawling into your lap so you will read them a story. The problem is, more and more often, books are displayed in rows with titles like “Girls’ favourite princess stories” or “Adventure tales for boys”. You would think that was something out of the 1950s, wouldn’t you? Oh no. Campaigns across the country such as Let Books Be Books, are demanding that publishers withdraw books that specify gender in the title and assume a very narrow range of interests based purely on the sex of the child. And, of course, this debate has been going on much longer in the world of toys.

Now, I know many parents who say things like “Boys just do like diggers and trains more than girls do” or “Every girl wants to be a princess”. Interestingly, I tend to hear this from parents who only have boys or only have girls. In this situation, I think we tend to forget the subtle gender stereotyping that we are probably doing without even realising it. My parents had two girls and thought themselves feminist. We weren’t allowed barbies or princess dresses. But then, we didn’t have a train set, or a work bench or any other traditionally boys’ toys or books either. In that sense, our world was still limited. Similarly, few boys growing up with brothers get fairy tales or wendy houses. By contrast, when you chat to parents with children of both sexes, there is a more realistic attitude. Parents admit that their little boys with big sisters went through a phase of loving tutus and dolls’ houses. Little sisters demanded a bike and a pirate outfit like their brother. When given the opportunity, children will experiment with whatever is available to them.

In my own experience, my little boy loves my daughter’s dresses and the very insipid Princess Pearl stories given to her as a present. Maybe it is the pretty flowing illustrations of underwater scenes or the shiny fake pearl on the cover. My daughter found an old Thomas the Tank Engine toy at Oxfam and went to sleep cuddled up to it every night after yet another thrilling tale about shifting freight around the island of Sodor. Heaven forbid if we’d lost “choochoo”! We all love books about dinosaurs and sharks in our house… But go to a bookshop or a toyshop and more than ever before, things for kids are colour coded and labelled so us hapless parents know which is for girls and which is for boys.

It goes further at school age. You know, boys like facts, logic puzzles, science. Girls like art, drama, writing. Of course, as you get older, you see how untrue this is. But people get pushed in certain directions, don’t they? It’s hard to be a girl into physics. It’s hard to be a boy into textiles. Consumer Affairs Minister, Jenny Wilmott, has argued that we are harming children's career chances and even the economy by segregating children's play.

So why should we parents limit our children’s imagination by telling them what they can or cannot dream or like or experience? Stories are where it all begins. What girls do. What boys do. Remember the rhyme?

What does that mean? Boys are dirty and adventurous? Girls are sweet and demure? Because by encouraging children in one thing, we tend to deny them another. Girls lose out on adventure, freedom, competition. Boys lose out on creativity, gentleness, romance. Whatever a child veers towards, whether it be inside or outside gender expectations, it doesn’t mean you shouldn’t help them appreciate the wider world of possibility.

There are great stories out there. The Paperbag Princess by Robert Munsch is about a princess who rescues her beau and then decides that he is too ungrateful and wasn’t worth the effort. In the more recent Zog by Julia Donaldson, Princess Pearl doesn’t want to be rescued by a knight, she goes off to be a doctor. These messages are important. They say that you can be whatever you want to be. And you don’t have to put up with people who aren’t very nice to you. Mole’s Babies by David Bedford is a story about a hapless Dad-to-be realising that all his babies need is love. Again boys need to know that being male isn’t all about bravado, it’s about caring and nurturing too. In Giraffes Can’t Dance by Giles Andreae we learn that Gerald can dance if he ignores the naysayers and believes in himself.

Stories aren’t the real world of course. It makes me feel a little bit heartbroken that for my little boy, pirouetting happily in the tutu he demands to wear to ballet, “aw, bless” may well turn into mockery if he wants to carry on at school age. My little girl will see that if she wants to continue playing football, she’ll probably be the only girl in the class. And they will both probably give up what they enjoy because of society’s gender expectations. But, at least I can comfort myself with this. Those expectations won’t have come from me. And maybe if we fight hard enough, young children will get to marvel at all the possibility out there for just that little bit longer…


Thank you for reading. Does this ring true for anyone else? Would love to hear if anyone has successfully managed to maintain gender neutrality as the kids have got older and how they did it!
Posted by Feminist Mum at 08:38