Is feminism the new COOL?


So feminists have complained for a long time that feminism is ignored by the mainstream, derided by the media and is generally under-valued as a movement to tackle social injustice and improve the rights of women. A few older women in the public eye have been vocal about their support for feminism including Meryl Streep, Diane Keaton, Kristen Wiig and Emma Thompson.
I love this quote from Maya Angelou:
But in general, it has not sat that happily alongside the media whirlwind that focuses on the glamour model, the teen starlet, the boy band.

Of course, in the last few years, things have been a-changing. We see young female actors and musicians "coming out" as feminists:  Lily Allen, Beyonce, Ellen Page, Lena Dunham, Taylor Swift. We see men in the mainlight following suit, Ryan Gosling, Joseph Gordon-Levitt, Patrick Stewart. In the last couple of months, Jennifer Lawrence has become a heroine for our time by declaring the hacking of nude pictures to be a sex crime, rejecting our long history of shaming female sexuality (Jessica Valenti, The Guardian). Emma Watson has given an impassioned speech in her role as UN Goodwill Ambassador, launching her HeShe Campaign in a video that went viral.

This has not been welcomed with open arms by some feminist women. Roxane Gay argues that these young celebrities are not saying anything new, they are simply presenting the arguments in a more attractive package.


"Feminism should not be something that needs a seductive marketing campaign. The idea of women moving through the world as freely as men should sell itself" (Roxane Gay, The Guardian).

But it is easy to forget that we just weren't talking about feminism in the media at all for a long time. Us feminists cannot just talk and rage amongst ourselves.

I would argue that feminism must aim to do two things. Bring about change, bring others with us. Women and men who are popular, attractive and talented have a huge role to play in bringing a younger generation of women to feminism and highlighting how it has a role in our lives. As we have seen from Women Against Feminism, the idea of feminism "selling itself" has frankly not got us very far. Feminism really is in need of a brand overhaul.

I do need to qualify this, however. I was dismayed to see the move that the Fawcett Society has taken with it's classic T-shirt featuring the slogan "This is what a feminist looks like". Previously a campaign featuring models of all genders, ethnicities and ages, the underlying message was "Feminism is for everyone". Through their latest collaboration with Elle UK and Whistles (one of the more expensive high street fashion retailers), the T-shirt is now re-designed, on sale for £45 and modelled by your classic attractive skinny blonde. This changes the message. This is saying "Feminism is cool". You want to be her. But that shift subtley undermines what feminism is about. It is not about wanting to be someone else. It is about being happy and confident in your skin and fighting for the rights of all women, yes even the ones who aren't blonde, skinny or wealthy.

So do I want feminism to be popular? I guess yes, I want it to be something in the mainstream that people talk about. Do I want it to be cool? No, I guess I don't. I don't want it to be flavour of the month. The Fawcett Society T-shirt will be featured in December's Feminist edition of Elle (their "first ever"!), with all their other features, photoshoots and interviews probably happily ignoring this particular angle, if not in that particular edition, then in all editions following it.

Where Roxane Gay is right is when she says this:


"So long as we continue to stare into the glittery light of the latest celebrity feminist, we avoid looking at the very real inequities that women throughout the world continue to face."

So yeah, buy yourself a T-shirt to spread the word and be happy that the profits are going to the Fawcett Society. But don't get complacent; issues facing women across the world are real, be it unequal pay, rape, trafficking or limited access to education. Unless you are donating serious time, money or stuff to an organisation actually doing the real work to defend, support or promote the rights of women, be it a university society, gender think tank, women's refuge or NGO working abroad, then think again about how much of a feminist you really are.

Otherwise you are about as feminist as my baby is... cute but blissfully unaware! 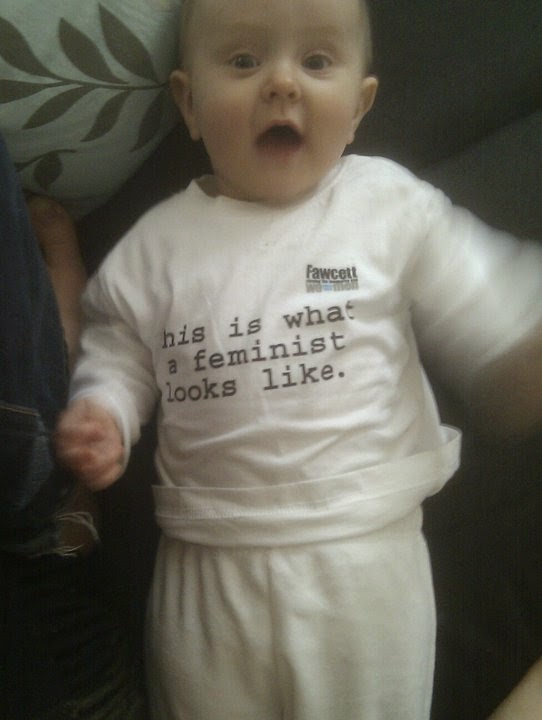