BIRTH WEEK: What if it's more than one baby!? 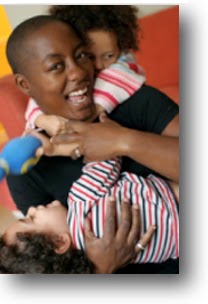 Multiple births account for 1 in 62 births in the UK, with the rising use of fertility treatments and women having children later in life increasing the likelihood of twin pregnancies. Experiences of pregnancy and birth with twins can vary substantially, twins who share a placenta for example are perceived as higher risk than twins who have a placenta each. In this piece, we hear from Mars Lord, who is a mum of five, including one set of twins, and works as a doula in London specialising in twin births.

1. What was your experience of birthing twins?

My personal experience was akin to most twin mums I think. There was an assumption from all around me, including some medical professionals, that it would be a caesarean birth. Despite all I know about birth today, then I knew nothing. I know right? A clueless mother of three. Fortunately I had a Senior Consultant that believed in women's ability to birth her babies. Rather unfortunately I never got the opportunity to birth my babies vaginally.

With sky rocketing blood pressure, I was pre pre-eclamptic and the decision was made to prepare me for caesarean birth. For me it was the coldest and most clinical of my births. With no knowledge of the things that I could do or request, I went happily into a sterile theatre and my babies were taken from my body. Please, don't misunderstand me, I know why it happened and I am grateful that it did, it was just, frankly, the worst of my birthing experiences for me. I felt so detached and absent, and when they handed me my babies, My initial thought was 'meh!'. I realise that it was the lack of oxytocin and my lack of involvement.

With my clients, it is much more of a mixed bag. I have seen some glorious vaginal births, some shocking interventions, some bullying and coercion, some fully supportive health care professionals and some beautiful caesareans. When everyone works together in support of the mother, amazing birth happens. These are not just the 'in a field of flowers with a choir' births, but also the hospital births, the caesarean births.

I have had clients change consultants when they have met rigid walls. Some have even changed hospitals. One client reached out to the head of her health trust who signed off on her birth plan so that she could have a physiological intervention free birth. This client wasn't ignoring medical advice, she simply wanted the chance to birth her babies herself. She stated time and time again that if medical circumstance indicated caesarean, then all bets were off and that is what she would do. Her joy and total delight at her babies entering into the world is one of the moments that has seared itself across my heart. Some clients don't have to fight that hard for a physiological birth. They have consultants and midwives who believe in them. In my opinion, that is key.

2. As twins are perceived as higher risk than a singleton pregnancy, do women pregnant with twins feel that their birth choices are more limited?

Yes, unfortunately I think that many do. We hear the word risk and tend to be automatically risk-averse. We would do anything rather than deal with a risk. What is unfortunate is that the risks on both sides often aren't talked about. So, it is important to find out  the following:


Often the choices that we feel we have to make are the very ones that increase the risk of us not having the births that we want. It is easy to be sent along the elective caesarean route. It is expected by pretty much everyone around us. Some women want to be able to move around freely whilst in labour. This shouldn't have to change because you are expecting twins. Do you want continual monitoring etc? When you labour with twins, you get to 10cm and you have your babies. You don't have to do the entire thing over again. You push for each baby.

You are more likely to have your babies in hospital, but you can birth your twins at home. Independent Midwives are available and, if you are prepared for the long haul 'fight' perhaps you can get a homebirth within the NHS. It is always a good idea to get hold of your hospital's Multiple Birth Policy. This gives you a framework with which to start your conversation with the consultant and the midwives. Be prepared to have to have the same conversation repeatedly. Craft your birth preferences. This is still your body, your babies, your choice. Take on board what the health care professionals are saying and don't be afraid to ask for the other side of the coin.

3. Do you feel NHS maternity services are well set up to cater for twin births?

I don't think that the NHS maternity service is well set up for twin birth. Of course this might just be my London-centric view. This saddens me because I do think that it ought to be and could be. There appears to be a sad loss of experience in twin vaginal birth amongst midwives, in the same way that there is a lack of midwives with breech vaginal birth experience.

We learn more and more that caesarean birth comes with risks that actually don't always make it safer than vaginal birth. Each family are different, each family should make the choices that are right for them. All the options for twin birth should be explored, there shouldn't be an automatic surgical option. I feel heartened each time I hear about another hospital that has helped facilitate a physiological birth of twins.

Of course we have to bear in mind that things don't always go to plan and that some complications in some particular twin pregnancies will necessitate a caesarean and rule out vaginal birth completely. We have these life saving measures for a reason. But we should take lessons from those midwives and consultants that listen to the mother and actually hear her.

I do feel the groundswell movement to give birth back to mothers and a working together of all the healthcare professionals. It is wonderful to have it happen and my prayer is that my children, and their children, benefit from it.

4. What do you think is the most important thing a woman can do to prepare herself for a positive birth experience?

A good birth is an informed birth. Know your options, get the multiple birth policy. Talk to the twin mums that have 'bucked the trend'. Make your plans A, B and C (how you would love it to go, what happens when it doesn't go to plan and the Caesarean section plan). Listen to the stories of twin mums who had positive experiences. The Positive Birth Movement has lots of stories and groups all over the world.


Mars Lord (MammyDoula) is a mother of five, including twins.  She is a birth and postnatal doula, specialising in twins, who works in London. An avid theatre goer and drinker of red wine, Mars is often found de-briefing mentored doulas in her favourite theatre cafe.  Her passions also include reading, dancing and all things birth. Follow Mars on twitter @mammydoula.


Are you pregnant with twins or a mum of twins? Have you felt supported in your birth choices? Would be great to hear your experiences!